How Words Changed One Dog’s Life 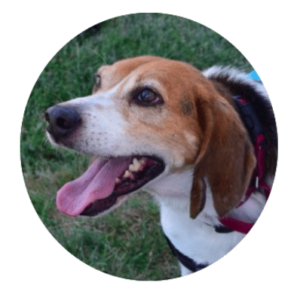 For two years, Bernie, a beagle, languished on Petfinder, where shelters and rescue groups post online ads for pets. Because he wasn’t getting much interest, at the two-year mark the director of Hedgesville Hounds, a dog rescue group I volunteer with, asked whether I would consider rewriting his doggy bio. The bio had already been written at least twice. A few people had met Bernie, but no one bit, so to speak, those first two years.

I knew that Bernie posed some challenges. He was an escape artist (aka flight risk). And he experienced separation anxiety and would do best in a home with another dog. He would not be happy crated all day while someone was at work.

So I interviewed Bernie’s second foster mom to get more details about his habits and behaviors.

After I did a rewrite that balanced Bernie’s strengths with his liabilities, he was adopted in under three months.

Let’s take a look at what I wrote. And I’ll tell you how it differed from the earlier version.

Bernie offers the best of two worlds. As a beagle mix, he can be exuberant and welcoming, always looking to make a new friend, whether human or canine. Bernie shows his joy by bouncing around, wagging his tail. He is quick to lean in for cuddles. He may rest his head on your thigh . . . or even lie in your lap if you invite him to. He’s at his most excited when he sees his favorite people. In many ways, he’s a classic good-natured beagle.

But he also offers some winning traits that are rare among hounds we’ve known.

“For a hound, he’s actually fairly quiet,” says his foster mom. “You don’t hear anything out of him when he’s in the house.” And if he sees something when he’s outside (like a squirrel or rabbit), he may bark a little. But it’s not nonstop howling like most hounds.

Bernie is a study in contrasts.

He is full of energy and loves playing with all kinds of toys. Tug toys, stuffed toys with squeakers, and Kong toys. And he enjoys accompanying his favorite people on long hikes, exploring. In fact, he is at his liveliest when outside, living it up in the great outdoors, blazing trails with his favorite people.

But he is also easygoing and laid back. Besides exploring outside, he also loves lying down on the deck or in the yard, watching the world go by.

He is not a stand-your-ground kind of dog. When the resident Chihuahuas at his foster home yap at him, he just turns and goes the other way. He’s happy to preserve the peace by letting them have their way. Outside, when meeting other dogs, he is quick to defer to them. But he meets them all comfortably and is dog-friendly.

Bernie also knows how to peacefully coexist with cats who come right up to him. He doesn’t pay them any mind. One cat even took food from his food bowl, and he didn’t have a problem with that. So we can safely say he is civilized around cats.

As a beagle, Bernie is super nose-oriented. But you probably guessed that, right?

Like other beagles, he is so scent-motivated that if he catches a whiff of something, he can’t help but put his nose to the ground and off he goes. Because of his deeply engrained nose drive, his yard needs a fence, preferably 5 feet high. He cannot be allowed off-leash in the open, as he may catch a scent and wander off.

During the adjustment period, before he fully realizes that your home is his for keeps, if he spots a cracked open door or gate, he will likely try to dart out. So you’ll need to take extra precautions to ensure he does not zip off leash outside unless he is securely fenced in. For this reason—his safety—we are recommending that his new home not have any young children. But with time, that need to dart out should subside as it has at his current foster home.

Did we mention how smart he is? Bernie has turned out to be highly food motivated, which makes him easy to train. He knows many cues, including “sit,” “stay,” “down,” and “leave it.” He’s a graduate of Pat Miller’s Basic Manners Academy at Peaceable Paws, where he was a quick study. While his leash walking is decent, he does tend to pull a bit. He’s just following his nose again.

Bernie in the past bonded with another dog who used him as her personal beanbag chair. He seemed to enjoy her closeness and warmth. And when she got adopted, it was a loss for Bernie. So another friendly, gentle dog who could be his best pal would be a plus in his new home.

Bernie is generally low maintenance. He is fine with baths and no-drama nail trims are the norm. He rides well in the car. And he is perfectly housetrained and will even let you know if he really needs to go out.

“He’s a good boy,” says his foster mom. “I think he’d make a pretty easygoing dog for somebody.”

I think the biggest difference between the earlier versions and this is that I wrote with the potential adopters’ interests and questions in mind. What’s in it for them? I played up Bernie’s strengths early on. And I provided a lot of proof of how he behaves.

A lot of pet ads talk about how the dog is funny or loveable but often don’t offer proof of what makes the dog seem that way. And what’s charming or sweet to one person might not be to another one.

As often as I could, I tried to create small scenes that readers could conjure up. People are visual learners. So the more your marketing copy is concrete and visual, the more powerful it will be.

Writers don’t often get to talk about how their words change lives. But this example shows how what you write and how you do it can make a difference. When I heard Bernie got adopted, I was as happy as a dog with two tails.